Extract from ‘The Story of Old Halifax’ 1920

One of the earliest steam engines to be erected locally was at Jumples Mill, and its duty was to pump the water that had run over the water-wheel, up again into the mill-race to drive the water-wheel once more.

In 1825, the owners of the mills driven by the Mixenden and Wheatley stream were so content with water-power, that they decided to make a reservoir at Ogden to ensure a more constant flow of water.

But in 1826 there was a long drought, and the mill-owners abandoned their reservoir scheme, and equipped their mills with steam engines.

Bradford manufacturers adopted factories and steam power more readily than the Halifax men, and from this time we may date Bradford’s pre-eminence in the worsted trade.

Ogden Water is a 34.5 acre reservoir surrounded by 174 acres of mature mixed woodlands and open moor. Since the reservoir was built in the 1850's, the site has been extensively used for walking, picnics, family outings, schools and nature studies. Today the site remains an important recreational venue for the people of Halifax and Bradford districts, and attracts many thousands of visitors each year. Rock Hollow Park was opened on March 23rd 1911.

The construction of the reservoir was started in 1854 by the Halifax Corporation to augment the general water supply of the town. The scheme employed 500 men and took until 1858 to complete. Holding nearly 222,000,000 gallons, and at over 300 metres above sea-level, the reservoir is capable of supplying Halifax by gravity alone. Up to 1,000,000 gallons a day can be released into the system for Halifax's drinking water.

The woodlands surrounding the reservoir were originally planted around 1905, with some felling and replanting around the time of the Second World War. The dominant tree in the woodland is Scots Pine, with Larch, Sycamore, Beech and Silver Birch also common. The wood has numerous habitats and together with the reservoir and surrounding moorland, provides food, shelter and nesting for a variety of birds.

In 1987, Calderdale Council Leisure Services entered into an agreement with Yorkshire Water (the owners of the reservoir and surrounding wood) to undertake responsibility for the management of the woodland at Ogden. As a result, the Council's Countryside and Forestry Unit are now pursuing an active programme to enhance the sites wildlife value and improve opportunities for quiet, informal recreation, including wheelchair access.

The earliest parts of the woodland were planted around 1903. Scots Pine is the dominant tree with Larch, Beech, Silver Birch and Sycamore also common.

Around 21,000 hectares of the South Pennines are internationally important habitats for birds. This area has been given the European status of 'Special Protection Area' (SPA). Ogden Water lies adjacent to the SPA and contains habitat typical of the area.

The moorland, woodland and reservoir provide a variety of habitats. These are used for nesting, food and shelter by over 130 different species of birds.

Ogden Water has over 5 kilometres of surfaced paths and tracks available to the walker. Nearly 2 kilometres of these paths are suitable for use by wheelchair users.

The windfarm was built in 1992 and supplies electricity to 7,000 homes.

Ogden Water has long been a popular recreational site for the people of Halifax and the surrounding district. With the reservoir set against the backdrop of woodland and open hills, it is not surprising Ogden became well known and loved as a local beauty spot, and once even gained the accolade of being called 'Little Switzerland'!

Even around 100 years ago, before the establishment of the Ogden woodlands, a popular and pleasant stroll for local people was the promenade across the dam wall, to reach what was the recreation ground on the far side.

The staff at Ogden Water would be very pleased to hear of any old photographs or pictures of Ogden Water. They already have an extensive collection, but would be delighted to see what you may have, with a view to adding them. 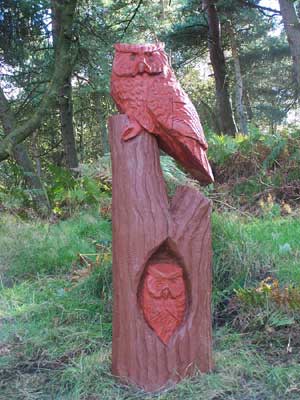