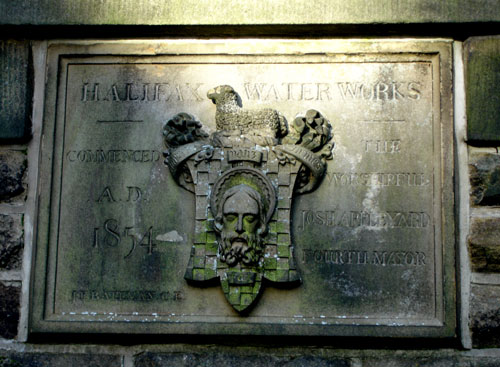 Embankment:             Earth with a clay core and clay blanket on the upstream face of the dam. (Clay stops the passage of water through the dam structure).

Geology: (And how it affected construction):

The glaciers of successive ice ages carved the smooth hills and valleys in the area creating some construction problems for the engineers. Before work can start on the dam proper, a cut off trench, 4 metres deep and 1 metre wide, has to be cut into the bed rock and lined with clay, to stop water flowing underneath the dam. On the south side of the valley, roughly where the turning circle is, Bateman encountered very fractured sandstone rock that had been undercut by the glacier. So, instead of the bedding planes being horizontal, he found that they were vertical because the rock, some 90,000 square metres, slipped into the valley when the glacier retreated.

Bateman could not secure a watertight seal in this very fractured rock and had to turn the clay core out towards the face of the dam to find harder rock. He couldn't find any decent rock, so he continued the clay right out to meet the face of the dam and then covered the entire surface with the clay. This feature, of part clay core and part clay blanket, is unique in large dam construction and is the only one of its type known in the world.

Brief History:             For 77 years the dam fed untreated water into the local area. It supplied the villages of Bradshaw, Illingworth North and parts of the Thrum Hall area down to Queens Road. In the early 1930s several things happened. The dam had its clay core raised to increase the safety factor and the rhododendron plantation was planted. In 1935 the treatment works were installed just downstream of the dam.

In 1980 more remedial work was required to increase the safety of the dam to modern standards. So in 1981 a new overflow and spillway were constructed. The old spillway is now used only as a valve shaft.

Visitors:              In 1987 Yorkshire Water and Calderdale Council decided to open up the reservoir to greater public access. The reservoir keeper was replaced by a warden service. An information centre and public toilets were added and the car parks were improved. The reservoir is often visited by over 2000 people per day in the height of summer. We have maintained access for horses to ride through to the Withens. Pedestrian access is also provided all the way round the reservoir, giving a number of scenic walks. The longest walk ends at the wind-farm and the Withens public house.


Local History:            The area was known to the Romans, and the track of an old Roman road, which went from Manchester to Ilkley, crosses the north end of the reservoir. The whole of the area, now known as Ovenden Moor, is thought to take its name from the Roman brick ovens, the word "den" being a Scandinavian addition meaning valley. The whole area was more heavily wooded then and the Romans used the excellent local clay and plentiful timber for brick making. In fact, until recently, there was still a working pottery only 1 kilometre to the north east at Soil Hill

Ogden is thought to have taken its name from a corruption of the word "bog", hence a boggy valley; quite natural with all the streams that drain into it, making it a perfect site for a reservoir.

Ovenden Moor and the surrounding area is largely grazed by sheep, and the Ogden valley was also grazed before the reservoir was constructed. There are also a number of milk herds in the area producing good quality, local milk.

What is a WITHIN?             A within is a barn like structure to house the sheep or cows when the weather is too bad for them to be outside. From a distance they just appear to be a stone barn, but closer inspection reveals that the roof has one or two openings in it to let the hot and moist air out to prevent damp conditions for the animals.

The high pasture at the Withins above Ogden is called Fill Belly Flat, which is a rather obvious name for the very good grazing to be had in the area.

Withins Wind Farm was constructed by Yorkshire Water and became operational in June 1993. It is an experiment to see how commercially viable this type of project can be. Electricity generated by the windmills is sold on to the National Grid. Because the area has been deforested over the last 2000 years, there are no trees to break up the wind and the site ranks as one of the ten most windy inland sites in England.

Ogden Water Treatment Works
In 1935 the treatment works at Ogden were brought into operation. The works served a population of 15,000 people and used a combination of sand filters and chemicals to treat the water.

Aluminium Sulphate was used to coagulate the particulate matter and the humic acid from the peat. This formed a heavy precipitate, (floc), which was taken out in rapid gravity pressurised sand filters.

There were 8 of these pressure sand filters, all 8 feet in diameter and six feet high.

Following filtration the water was treated with Chlorine to disinfect it, then Sulphur Dioxide was added to remove the excess Chlorine.

Initially this method of treatment was thought to be OK but as pressure on the works became greater and the quality of the raw water declined due to successive droughts it became necessary to improve the treatment process.

The works were finally taken out of service in 1990 and the water now flows by gravity through Mixenden Reservoir, on to Ramsden Wood Reservoir and finally into Albert Reservoir at Thrum Hall. From here it goes through a new, modern, multi-stage treatment works.

A final chlorination and balance to a slightly alkaline nature completes the treatment process.

After treatment the water is pumped up to the old service reservoir at Skirden Clough, (a lift of 120 metres), where it can gravitate into the system of distribution pipes to feed its old area of supply.

As the dam is now over 150 years old, the construction was completed in 1858, it is not surprising that work continues to be undertaken to ensure it's operability. In the early 1980s a new overflow structure was installed and the valve tower was raised. In the early 1990s modifications were made to the drawoff pipework. Further works on the embankment are planned in the next 2 years to ensure that the dam continues to provide reliable service to customers in and around the Halifax area.