Mike Jackson who holidayed at Rose Cottage, Upper Brockholes, in the 60’s writes:

I recall asking my mother, Jessie Fielden what the terracing was for and she told me that it was intended to be a pleasure ground or water park where there were going to be boats for hire.  She said it was never finished and I think she said it was because the person(s) involved ran out of money so I do not know exactly where the boats were intended to be.

I cannot remember what the ground is like immediately opposite the terracing although I do remember nearby there were some level areas like shallow dams so maybe they were to be part of the Hydro.  I remember there was a slightly higher footpath in the middle where we used to walk but the dams themselves were often wet and impassable.

I suppose that the intended Hydro would fit into the overall scene at Ogden whereby the good people of Halifax would travel by tram to the terminus at Causeway Foot and take the air around Ogden to escape the smog of the town.

Bob (Jackson) and I used to play down by the beck regularly and I recall that he and his friend Donald Whitely from the Peat Pits Inn built a stone dam across the beck immediately below the Hydro and it survived for many years. 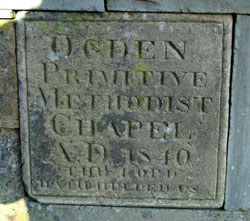