Ogden Water Receives  £1000 cheque from local Freemasons! Representatives of Rokeby Lodge of Blackwall, Halifax presented The Friends of Ogden Water with a cheque for £1000 today. 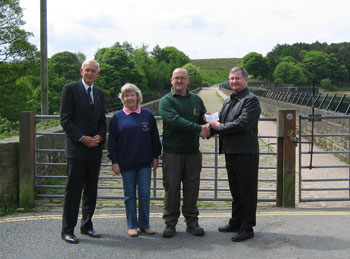 The community group was awarded the funds towards their 150th Anniversary project which will restore the dam promenade to it’s former Victorian glory with cast iron gates, period seating and gas lamps.

Mr. Peter Hargreaves, Worshipful Master of Rokeby Lodge and Mr. John Stevens, Regional Charity Assessor presented the cheque to Craig Spencer and Christine Crowther of the Friends of Ogden Water. The generous donation goes a long way towards achieving the £8000 target for the improvements at Ogden and was provided by the Provincial Grandmaster Fund for the province of the Yorkshire West Riding. The official opening ceremony for the new-look promenade will take place at 1pm on Saturday 1st September.

From left to right on the picture: